Vancouver, British Columbia – September 7th, 2021 – Sky Gold Corp. (TSX-V: SKYG) (US:SRKZF) ("Sky Gold" or the “Company”) announces a VTEM survey is now underway on the newly acquired Imperial Property (“Imperial” or the “Property”) which shares 4.7 kilometers of it’s northern border with Amex Exploration’s (TSX-V: AMX) Perron Property in Quebec. The VTEM survey is being conducted by Geotech Ltd. and being flown as part of an overall larger survey in conjunction with a number of other exploration companies in the area.

A total of 328 lines covering 1,087 kilometers are being flown over both the La Reine and Le Roi property that comprise the Imperial Project. Imperial is comprised of a combined 228 claims covering approximately 6,575.84 hectares in the gold and VMS-prospective Abitibi Greenstone Belt region of Ontario and Quebec. Refer to maps in Figures 1 & 2.

Mike England, CEO & President, commented: “We are excited to have begun our maiden work program at The Imperial project in Quebec. This camp is heating up and we are in a prime location to potentially host exciting new discoveries of our own.”

The Property is underlain by a mafic-intermediate metavolcanics belt of the Stoughton-Roquemaure Group and the Hunter Mine Group, bordered to the North by a greywacke Unit of the Chicobi Group and to the South by the Abitibi Lake syn-tectonic pluton. The Property is crossed east-west by the Abitibi Thrust Fault, which dips 70 degrees to the South. The overall lithological package strikes east-west and deeps steeply to the South and is contiguous to the Amex Exploration property to the North East.

Historical exploration efforts across the Property have resulted in the discovery of 10 mineral showings (Mineral Deposit Inventory Record – Ontario Government) across the project. Historical exploration works include diamond drilling, overburden drilling, airborne magnetics, ground geophysics including magnetics and electromagnetics, surface geochemistry, geological mapping, and prospecting. Companies that conducted the work include but are not limited to Kennco, Canadian Superior Ltd., Asarco, Cominco, Eastern Mines Inc., Seal River Exploration, and East West Resources Corp. Mineralization at showings range from anomalous copper and zinc associated with disseminated to massive sulfide layers (pyrrhotite/pyrite), gold in till from overburden drill sampling with a high amount of delicate gold grains (indicating a proximal source), as well as trace to anomalous gold and copper in diamond drilling. 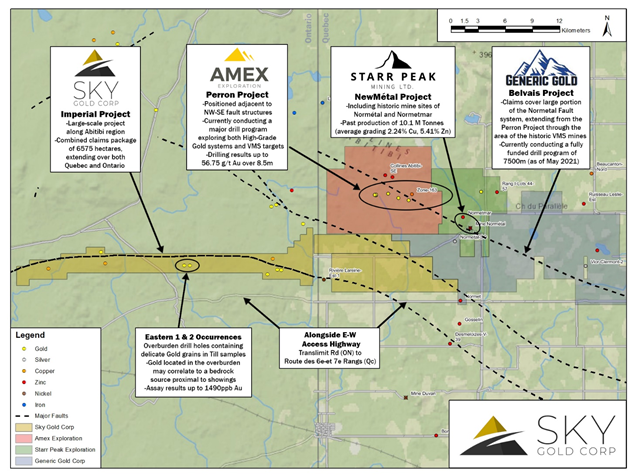 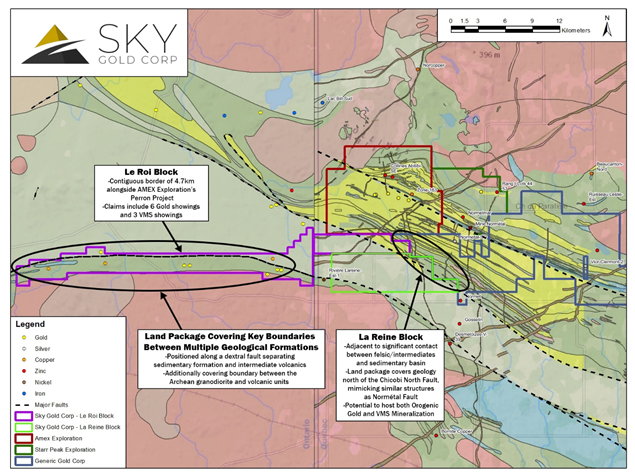 Qualified Person – Catherine Fitzgerald, P.Geo., a Qualified Person under National Instrument 43-101, and Independent Director of Sky Gold, is the Qualified Person responsible for reviewing and approving the technical contents of this news release as they pertain to the Imperial Project.

Sky Gold Corp. is a junior mineral exploration company engaged in acquiring and advancing mineral properties in Canada and the USA. In addition to the Company’s Newfoundland properties, the Company also owns the Evening Star property, located 12 km southeast of Hawthorne, NV, which is prospective for gold mineralization and Carbonate Replacement Deposit (CRD) base and precious (silver and gold) mineralization.