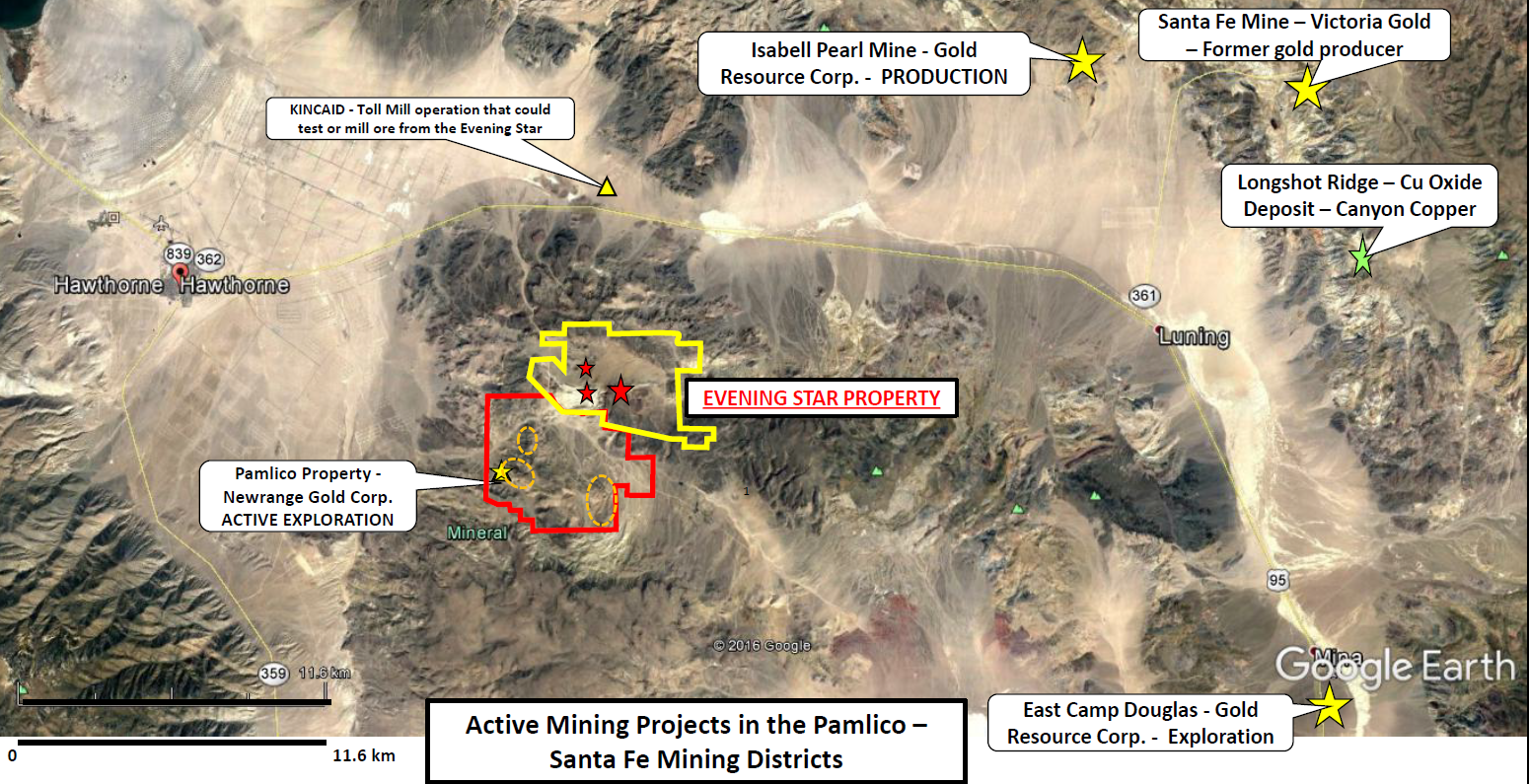 The Evening Star property is located in west central Nevada in Mineral County and is comprised of 43 unpatented mineral lode claims totalling 660 acres. The property covers two historic, formerly producing mines, the Evening Star mine and the Gold Bug mine.The Evening Star Mine shows a similar geological context as La Panta Mine located about 1.6 km to the west and is known as a replacement or manto type deposit where free gold is contained in irregular masses of siliceous ferruginous locally jasperoidal gossan material forming replacement bodies in limestone. The Gold Bug Mine is a skarn type deposit where copper mineralization occurs along the contact between quartz monzonite and limestone. The property is readily accessible by well-maintained dirt roads, south for approximately 9 kilometers from U.S. Highway 95. Despite the mining history that dates from the early 1900’s, the property has seen little modern exploration.

The Evening Star property covers two historic, formerly producing mines; the Evening Star mine and the Gold Bug mine, and is prospective for gold, silver, and base metal mineralization in several deposit types. One objective of the recent surveys was to assist the targeting of silver-rich skarn and/or Carbonate Replacement Deposit (“CRD”) mineralization encountered in a single diamond drill hole in 1970 (exact collar location unknown) which were reported to have returned the following historic intercepts:

*Silver equivalent (Ag Eqv) values are calculated assuming 100-per-cent recovery using $24.00 (U.S) per oz Ag, $3.50 per pound Cu, $0.95 per pound Pb, and $1.25 per pound Zn. The company is disclosing results on a silver equivalent basis due to the overall silver-dominant value of the mineralization. It was confirmed by the geologist on the historic 1970 drill hole that it was not assayed for gold.

The reader is cautioned that these historic drill hole results from 1970 were completed prior to the implementation of National Instrument 43-101 and must be considered only as a historic reference. Neither the Company nor its Qualified Person have completed sufficient work to verify this historic drill hole, and they should not be relied upon.

Magee Geophysical Services based in Reno, Nevada completed a ground magnetic and gravity survey over the northern portion of the Evening Star property with detailed 33-meter line spacing in the target area of the 1970 drill hole. Interpretation and review were completed by Wright Geophysics based in Elko, Nevada. The detailed portion of the ground magnetics and gravity surveys were conducted over 0.4 square kilometers, and the larger survey at 66-meter spacing covered approximately 5.8 square kilometers. 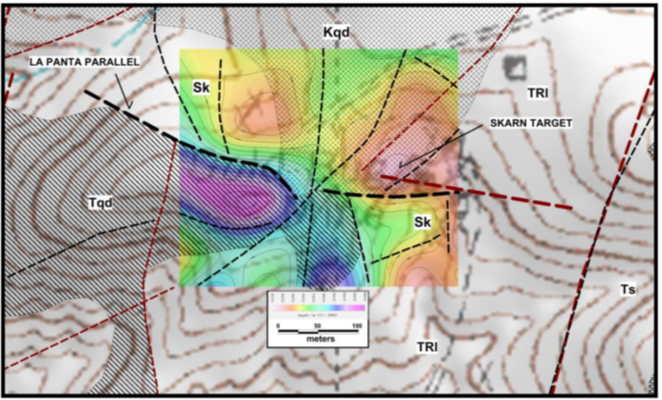 The ground magnetic and gravity surveys were successful in supporting lithological interpretations and defining structures over much of the property. North-south and east-west structural features that traverse the property were indicated. Seven structures were identified as having the same orientation (WNW-ESE) as the La Panta vein, a historic producer of gold. One of these structures traverses the area of historic exploration in the vicinity of the Gold Bug mine, near the projected area of the 1970 drill hole. Figure 1 shows skarn targets as interpreted from the detailed gravity results along with a La Panta parallel structure target.

The Company views this La Panta parallel structure, that extends directly through the Gold Bug mine workings, coincident with a strong magnetic high anomaly, as a priority drill target for silver-rich skarn/CRD mineralization similar to the intercepts cut in the drill hole completed in 1970.

EM Strategies has been retained to lead the permitting of a drill program directed at the above targets and additional zones on the federal Bureau of Land Management claims on the Evening Star property.